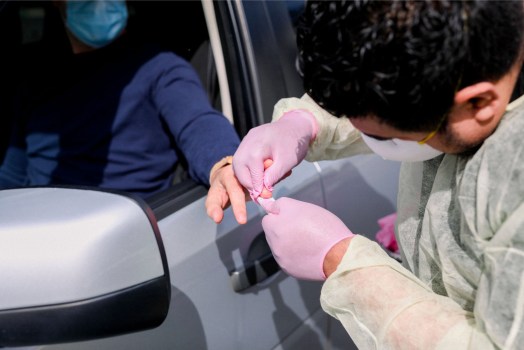 Everyone’s wondering. That cold I had a month or two ago. The dry cough. The fatigue. Was that COVID-19? Have I already been infected?

Executives at Kareo, an Irvine company that develops software for doctors and medical practices, didn’t want their workers to wonder anymore.

Since wide-scale testing for coronavirus remains unavailable through traditional channels — such as public health departments and hospitals — Kareo CEO Dan Rodrigues decided to just do it, offering antibody tests to any curious employees on his workforce who wanted one.

He found a doctor to partner with — Jennifer Armstrong of Newport Beach. They talked to experts. Weighed the different antibody tests coming to market. And on Saturday, April 18, about three-quarters of Kaero’s workers and a few family members queued up in their cars to have their fingers pricked in the parking lot of Armstrong’s office.

These tests, called serology tests, detect antibodies to the virus in the blood of people who’ve recovered from coronavirus — or who never knew they were infected at all. They’re not used to diagnose active illness, but to pinpoint how widely infection has spread in the community. That information, in turn, can help public health officials figure out when and how to reopen the economy — but the roll-out has been agonizingly slow.

A total of 415 people, including CEO Rodrigues, were tested in Armstrong’s parking lot. Stunningly, nearly 10 percent of them did, indeed, show antibodies to coronavirus.

That’s an infection rate far higher than what’s coming out of antibody surveillance testing in Los Angeles and Santa Clara counties. There, public health departments partnered with universities in search of representative samples.

A similar effort in Orange County is under construction. Rodrigues feels this is something private sector employers can clearly help with.

“We wanted to, first and foremost, show we care about our workers’ well-being,” Rodrigues said. “And we wanted to learn a bit more about how a return to work might be managed, and to educate others on what we’ve learned from our experience.

“We live in an age of big data and analytics, and we have neither data nor analytics on this,” Rodrigues said. “That’s an issue, especially when the crucial question is, ‘How prevalent is COVID-19 in the community, and to what extent are we building immunity?’ “

Rodrigues wrote about Kareo’s effort on Medium, which has sparked interest from other businesses wanting to do the same thing.

“It’s important for business owners and CEOs to do everything they can,” Rodrigues said. “Get involved, learn, apply American entrepreneurial ingenuity to how we might return to work.”

In Los Angeles, officials estimated that about 4% of county residents have been infected with the virus, with the range being 2.8% to 5.6%. That’s about 40 times larger than the number of confirmed cases.

In Santa Clara — which tested more people, but whose sample has been criticized as not sufficiently representative of the county as a whole — about 3% of residents have been infected with the virus, with the range being 2.49% to 4.16%. That’s about 60 times larger than the number of confirmed cases.

Rodrigues isn’t an epidemiologist. He knows the tests aren’t perfect and that his employees don’t represent Orange County as a whole. But, in the big picture, all three efforts illustrate the same essential point: The true coronavirus infection rate is many, many times higher than the number of confirmed cases.

Kam Kalantar-Zadeh, a specialist in internal medicine, nephrology and pediatrics at UC Irvine and an adjunct professor of epidemiology at UCLA, reviewed Rodrigues’ piece. “I like this approach,” Kalantar-Zadeh said. “And 10% prior and current exposure make sense. I would recommend the serology testing for all communities, be it a working community, residential, church, etc.”

However, there are several cautions to keep in mind, he said. Antibody tests can produce false negatives if infection is still very new. And it’s unclear how long antibodies for COVID-19 remain in the blood — it could range from weeks to months or years.

As long as antibodies are circulating, there’s hopefully some level of immunity against COVID-19, he said. But if this virus is like the one that causes the common cold, where antibodies gradually disappear over weeks or months, then reinfection is possible. Indeed, there have been more than 100 reports of reinfection from South Korea, he said.

“As an analogy, the common cold has no cure, no long-lasting immunity — we can get several colds a year — and no cure, which may be the emerging bitter reality in dealing with COVID-19,” Kalantar-Zadeh said.

Philip L. Felgner, director of UC Irvine’s Vaccine Research and Development Center and Protein Microarray Laboratory and Training Facility, reviewed the piece as well. “We don’t know how much of the 10% is due to cross-reactivity from other common coronaviruses,” he said. “He would need to compare (antibody) levels from specimens collected several years ago before the outbreak.”

Felgner’s lab has many thousands of pre-outbreak specimens that could be used for comparison, he said.

The county’s public health laboratory will soon start validation testing on a serology test that hasn’t yet been authorized for emergency use by the U.S. Food and Drug  Administration, but is expected to get that authorization very soon, said David M. Souleles, deputy agency director of public health services.

That effort will first target target health-care workers and first-responders, but the goal over time is to greatly expand serology testing, Souleles said.

“Serology testing will play a key role long-term in helping us understand herd immunity and how widely spread COVID has been in our community,” he said.

No one at the OC Health Care Agency or the California Department of Public Health wanted to weigh in on what role private employers might play, if any, in that effort.

“This is ‘all hands on deck,’ ” said Rodrigues, CEO of Kareo. “Across the country, clearly, testing is not scaling as fast as it needs to. It’s not a political issue — I think everyone’s working really, really hard — but clearly we need to do a lot better. More and more resources are starting to come on line, but the problem is, they’re happening by the hundreds or thousands, and we need to scale these up to the millions. … Our experience suggests there may be light at the end of the tunnel for testing.”

The testing was completely voluntary, and some workers at Kareo were grateful for the chance.

“It was pretty easy,” said Aaron Perreira, director of integrated marketing. “We filled out a survey, were issued a time slot, drove up, queued up, rolled down the window. In 15 minutes you had your results. It was great to be able to get that peace of mind and know whether the stay-at-home protocol you’d been adhering to, did it really work?”

Deep down, a lot of folks were hoping they had antibodies and a shot at immunity. But social distancing apparently has worked — both Perreira and Rodrigues tested negative.

They suspect, however, it won’t be the last test they get.